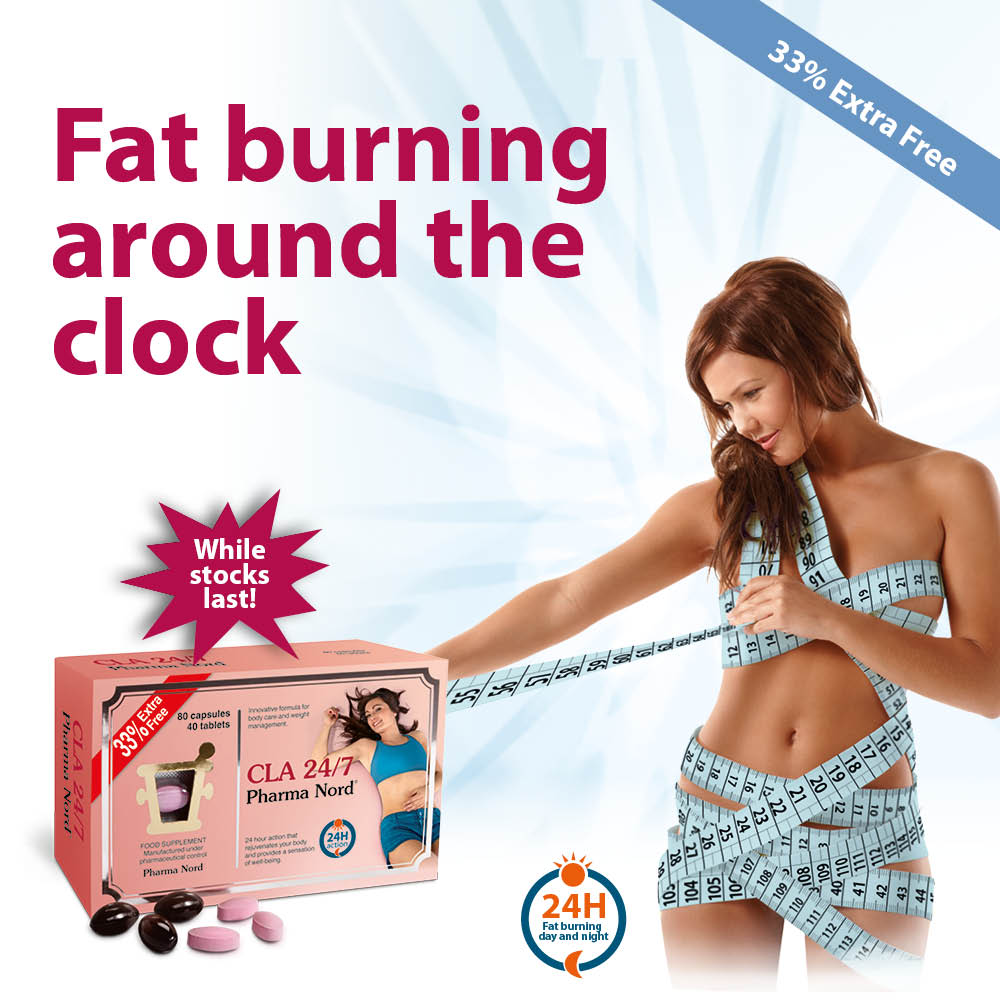 TIME FOR TONING
THE 24 HOUR SUPPLEMENT FOR A LEAN BODY

CLA 24/7 is a supplement that has been tailored to support toning and fat burning in females. It combines the three most effective compounds for fat burning and energy production – CLA, green tea extract, and L-Carnitine

Forget skinny, 2016 is the year for strong and athletic women. Undoubtedly, you’ve heard the horror stories: strength training makes girls bulky, it’s bad for your joints, and once you have muscle, you can’t stop exercising or it will all turn to fat. It’s the biggest myth in the fitness industry, and it feeds into stereotypes that are keeping so many women from achieving their dream body. Times have changed and there are an increasing amount of females stepping away from the aerobics class and towards the weights. CLA 24/7 is a supplement that has been tailored to support toning and fat burning in females.

The skinny on fats

CLA (Conjugated Linoleic Acid) is an essential fatty acid extracted from the safflower. It inhibits the activity of lipase enzymes which are responsible for ushering fat into fat cells. In the presence of exercise, the fat can be directed towards the muscle where it can be used to increase lean mass.

L-Carnitine is found in most tissues throughout the body, but is highly concentrated in skeletal and cardiac muscle tissues. It plays a critical role in transporting fatty acids into the mitochondria, or the “furnace of the cells,” where it can be burned to produce energy. This helps prevent fatty-acid buildup in fat stores in addition to maintaining healthy blood triglyceride levels. L-Carnitine serves a vital role in energy production and even acts as an appetite suppressant. It not only inhibits fat storing, but it also increases exercise endurance and reduces muscle soreness from intense exercise.

Green tea extract is loaded with polyphenols like flavonoids and catechins, which function as powerful antioxidants.These substances can reduce the formation of free radicals in the body, protecting cells and molecules from damage. These free radicals are known to play a role in aging and all sorts of diseases.
Caffeine has been shown to increase aerobic capacity and strength when taken prior to a workout. Another key benefit of caffeine is that it lowers the perception of intensity, or effort.

Take two pink tablets before your workout. The caffeine in green tea has been shown to increase exercise performance while lowering perception to pain.

Are you sick of yo-yo dieting? Many people are successful with weight loss but the real strggle comes with maintaining it. The benefits of calorie restriction can come to a standstill if you start to lose muscle mass, which most people do when dieting.. Muscle mass has metabolism boosting effects.

The reason muscle loss occurs is simple. When you’re eating less, your body will often use its muscle for the energy it needs. Increasing L-Carnitine and CLA levels gives you the energy you need and prevents muscles from being broken down.

How the ingredients work in synergy….